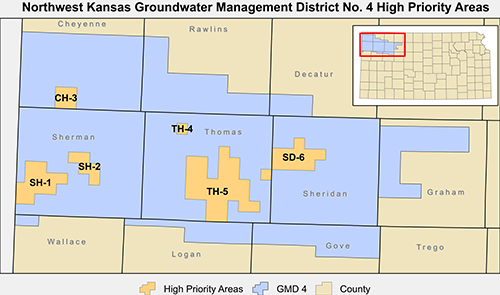 In order to extend the economic life of the aquifer and maintain the economic base of the region, water conservation alternatives are being evaluated. An economic analysis is being conducted on the Sheridan 6 Local Enhanced Management Area (SD-6 LEMA) to measure the impacts to producers, the regional economy, and hydrologic impacts to the Ogallala aquifer associated within the LEMA.

A process to implement locally developed groundwater conservation plans was passed by the 2012 Legislature (K.S.A. 82a-1041). The Kansas Water Plan calls for locally developed plans to conserve and extend the life of the Ogallala High Plains aquifer. LEMAs provide a mechanism for stakeholders to develop groundwater conservation plans for areas within a Groundwater Management District (GMD).

A LEMA provides protection for stakeholders as their voluntary plan cannot become more restrictive than proposed. Producers in a high priority area in Northwest Kansas GMD No.4, known as SD-6 proposed a LEMA to extend the useful life of the Ogallala aquifer in their 99 square mile area. All irrigators were given 55 acre-inches for the five year LEMA period. Irrigators could use their 55 acre-inch allocation with flexibility as needed, using more water in dry years while saving water in wet years when full irrigation is not needed. They could also seek temporary transfers of allocations between water rights anywhere within the SD-6 boundary.

Results shown in the winter of 2017 include three years of data from SD-6 LEMA area. The 2013 producer data shows a higher cash flow per acre for those growing corn and soybeans within the area.  (cash flow = revenue less variable expenses less land rent)  The study showed a large increase in acres dedicated to sorghum production and a decline of irrigated corn acres.  A video of Dr. Golden presenting his findings can be found here: https://youtu.be/9vuExNbExhc

A recent presentation by Dr. Golden at the 2017 Governor's Conference on the Future of Water in Kansas can be found here.